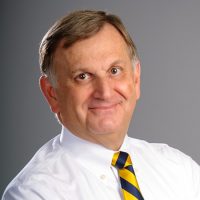 For our first Member Spotlight, we chatted with Dr. Wayne Burton about what he sees as the future of value assessment. Dr. Burton has been with IVI almost since its inception. This interview is an adaptation of a conversation we had with Dr. Burton this fall.

Tell us a little about yourself and how you have connected to IVI.
I am a board certified physician by training and have served as the Corporate Medical Director for several large employers, including American Express and JP Morgan Chase. I was previously Chairman of the Board of the Midwest Business Group on Health and was a member of the Board of Directors of the National Business Group of Health. In these and other roles, I have co-authored over 100 medical journal papers on employee health, productivity, and disease management. Throughout my career, I have shared the IVI perspective that healthcare costs must be considered in a holistic way.

A few years ago, I happened to be in a meeting with one of the founders of IVI, Darius Lakdawalla, who invited me to represent the employer perspective on IVI’s Scientific Advisory Panel. I was happy to participate and I continue to participate because the mission and vision of IVI aligns with my work and research, and I see the importance of IVI’s work as it relates to my own.

What is an example of a project or initiative that you believe will improve value assessment?
I’m delighted that IVI has decided to undertake Major Depressive Disorder as its third value assessment model. For employers, it’s a great model because depression doesn’t always show up on employers’ direct healthcare costs, but if you look at disability claims, depression is usually in the top two or three reasons for missed work. This is especially true for employers with relatively young or predominantly female workforces. In addition, if you look at productivity models, depression is usually one of the top reasons for lost productivity. The IVI model has the potential to capture these so-called “indirect costs,” which are really direct costs for both employers and employees.

How do you see IVI contributing to advancing patient-centered value assessment?
While I think that few employers will actually use this model directly, it changes the landscape by raising attention to the complexities of treating Major Depressive Disorder. I am delighted to be involved in IVI because employers really understand that cost is a part of the value proposition and that the total burden of costs may be far greater than the cost of a prescription medication.

Purchasers are going to buy medications that are effective and safe, but the medications that are coming out now, and in the future, are often exceedingly expensive. Given those high upfront costs, we need to understand the bigger picture. We have to look beyond the initial cost of therapies to include the patient’s perspective on these medications, as well as the indirect costs, such as disability and productivity loss. These are components of the value equation that often get lost in traditional value assessment. That’s how employers are going to benefit by IVI being out front with their model – it is another voice demonstrating that the value proposition extends far beyond “direct” costs.

Please share a little bit about some of your work and how it connects to value assessment.
Over 30 years ago, we were one of the first employer researchers to recognize the impact of depression in the workplace (Wall Street Journal, “Banker Blues,” 1992). We realized early on that there was a cost-offset for investing in mental health services. Throughout my career, I have been looking at other diseases that are not typically on the radar – those with lower direct costs, but higher indirect costs – like depression, but also migraine headaches and others. My work focuses on the big picture for employers to fully understand the costs associated with diseases.

I always say there are three “pens” paying for healthcare costs – the prescriber, the patient, and the purchaser. We need to understand and address the needs of all three stakeholders to truly move forward in the value assessment of healthcare.

What would you tell other organizations is the value of joining and working with IVI?
It is important for all stakeholders to be at the table contributing to the understanding, definition, and assessment of value from their stakeholder perspective.

He has been the recipient of several awards including the Health Achievement Award and the Adolph G. Kammer Merit in Authorship Award from the American College of Occupational and Environmental Medicine (ACOEM), the Jonas Salk Health Leadership Award from the March of Dimes, the Innovation Award from Mental Health America, the Mark Dundon Research Award from the Health Enhancement Research Organization (HERO) and Innovation in Health and Productivity Award from National Business Group on Health (NBGH). Dr. Burton is Board Certified in Internal Medicine and is Associate Professor of Clinical Medicine, Feinberg School of Medicine, Northwestern University and Adjunct Professor of Environmental & Occupational Sciences at the University of Illinois at Chicago.

Many thanks to Dr. Burton for taking the time for this conversation and for his ongoing commitment to advancing the science of value assessment.